The day we made it to Gokyo, we spent the afternoon climbing up the lateral moraine to get our first glimpse of the glacier. It was awe-inspiring. The Ngozumpa is a debris-covered glacier. It is fed in its accumulation zone by avalanches, so the snow contains a lot of rocks/boulders of all sizes. When the upper layers of the ice and rock mixture melt, the rocks (debris) is left over and covers the surface of the glacier. 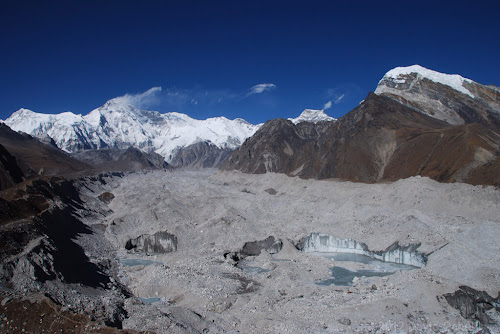 View north onto the Ngozumpa from the lateral moraine at Gokyo.
Lakes of melt water form on the glacier, exposing ice faces. The drainage of those supra-glacial lakes into lower basins on the glacier is the primary cause for the formation of caves in the ice. (Water streaming across the bedrock under the glacier being another, but those were not caves we were expecting to find on this trip due to the depth of the glacier.) After such a drainage event, cave entrances are often visible in the ice faces of drained lake basins, and this is what we were after. (Entering crevasses or moulins in the hopes of finding caves on debris-covered glaciers does not seem to be a good idea, since inevitable, you will be showered in debris when attempting to do so.) Luckily, we were able to identify several potential cave entrances during this first recon trip, and even a convenient way onto the glacier down the steep moraine -- a few years ago, the trail that leads to Dragnag and the Cho La on the other side of the glacier had moved north about two kilometers and now allowed (relatively) easy access to the glacier directly from our lodge in Gokyo.

During our two weeks in Gokyo, we found a total of four caves that we explored, and investigated a number of other entrances that either didn't go anywhere or appeared to dangerous for us wanting to spend time in them: 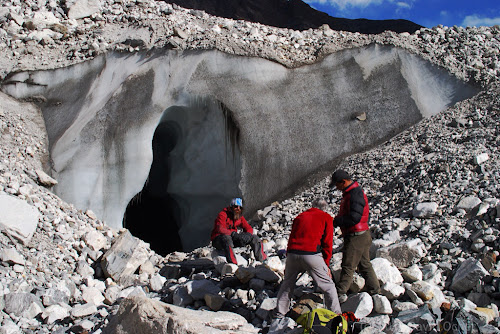 Jason explaining the basics of glacier cave relevance for GlacierWorks footage.
Cave #1 had a huge keyhole entrance and was maybe 500-600 meters long. It turned out that Jason had already surveyed this cave in 2009. The cave had experienced several modifications since then, including a new branch of passage that led to another entrance in a different (dry) lake basin. We started a re-survey, and Vickie and I learned the particularities of surveying ice caves: setting survey stations with an ice screw and marking them with paper flags, and being particularly accurate with LRUDs (left-right-up-down measurements from the station). In the meantime, Jason and Pati started measuring the scallops on the cave walls that indicate the direction and flow rate of the water through the cave during the drainage event that created the cave. They soon realized that this cave had experienced too many such events to be useful for the model that Jason was looking to create, and we abandoned the survey.

Cave #2 was a small, nicely decorated room in the dry lake basin that could be reached by a trip through Cave #1. Caves #3 and #4 were found toward the end of our stay. #3 started out as a fairly large room with a low ceiling, and a canyon carved through the ice on one side of the room. Below that canyon, more cave passage could be made out, but not reached. At least not with the limited amount of vertical gear that we had made the porters drag up the mountains. (We hadn't bothered, because previous expeditions had not found much in terms of vertically developed caves on the glaciers in the Solukhumbu region.) Cave #4 was a few hundred meters long and fairly well decorated with ice formations. By the time we found it, we had run out of time for a proper survey, though. 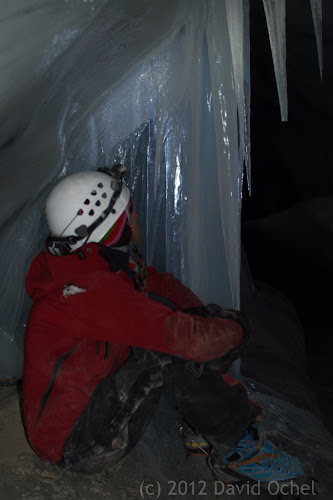 Pati admiring drapery.
On our last caving day, we returned to cave #1 to help David Breashears of GlacierWorks, who we had run into a few days earlier, make the cave virtually accessible for education purposes. Mainly by Jason pointing out and explaining relevant features of the cave to support still and video photography taken by GlacierWorks.

To sum it all up: We had a good time, got to go play in some beautiful caves, help an education project, and learn some new things about the Ngozumpa Glacier. And since this was a self-financed trip, we also took the liberty to "tourist" around and spend afternoons climbing Gokyo Ri and hiking out to the Fifth Lake for a view of the intersection between the Gyazumba and Ngozumpa Glaciers. A truly beautiful place. 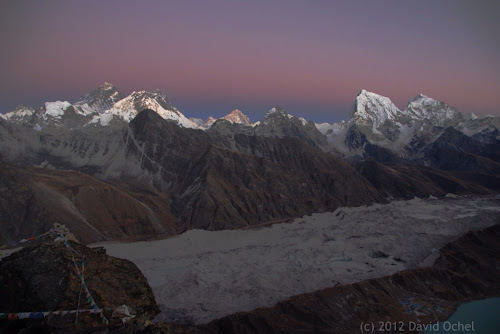 View from Gokyo Ri at sunset: Everest & Co; southern part of the Ngozumpa; Gokyo; and parts of the Third Lake.

p.s.: Don't try this at home. ;-) While some of the dangers of glacier caving are quite obvious (rocks hitting you while you run in or out of the debris-covered entrance), others (such as, false floors, and cracks in the ice that indicate the potential for a collapse) aren't. Jason spent several hours teaching us what to watch out for...

Traveling in the Khumbu

We made it. From Kathmandu at the end of October to the "most dangerous airport in the world" (Lukla, at 2840 m elevation), and then up the mountains for not quite two vertical kilometers, to Gokyo (at 4790 m / 15715 ft). And back about four weeks later. This blog post will summarize our travels, and I will write a separate one on the glacier caving we got to do during our two-week long stay in Gokyo... 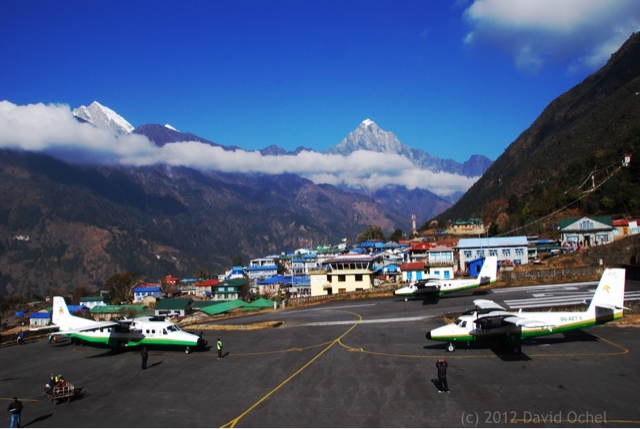 Turnaround time for passenger machines seems to average something like 5-10 minutes. The one in the background is on the runway, about to take off.

Flying (into and back) out of Lukla airport, with its 12 degree sloped and 460 m long runway, is quite entertaining. (The seeming chaos introduced by the airlines' check-in systems is almost worth a separate blog entry, but on the other hand is nothing that can't be dealt with...) Due to our issues with getting a flight out to Lukla from Kathmandu in the first place, we had decided to actually make reservations for a return flight on a specific date, rather than getting an "open return" ticket that allows more flexibility. This proved to be a smart move a month later when we were ready to return to Kathmandu, since bad weather and the going bankrupt of another airline left many people stranded in Lukla, waiting for seats on full flights to open up.

Only Jason had been at these altitudes for a prolonged time before, so we had an interesting time figuring out how the rest of us would adjust to it. General recommendations for people who don't know how well they acclimatize seem to include to move up about 300 to 500 meters a day, and to spend a rest day every 1000 m or so. So we learned all about the symptoms of altitude sickness (AMS, HACE, HAPE), but our constant self-diagnosis attempts got interfered with by various colds and other aches that everybody in our group was fighting on the way up -- not the ideal condition for quick acclimatization, it turns out.

We spent extra rest days at Namche Bazaar, where a German bakery serves really excellent cappuccino and pastries, and in Machermo, where you can attend a free talk about altitude sickness every afternoon at IPPG's volunteer-staffed Porter Shelter and Rescue Post. And we decided to head straight for Gokyo and the Ngozumpa Glacier, instead of paying Gorak Shep and the Khumbu Glacier (at even higher elevation) a visit first.

I think I personally dealt with the altitude OK. I rarely felt sick, other than having a mild cold at some time and a stuffy nose most of the time -- things I usually incur quickly when in colder climates. But after two weeks in Gokyo, climbing up the lateral moraine to get out of the glacier was still quite a strenuous task, as was climbing more than just a few stair steps. But maybe that is just they way it is. ;-) 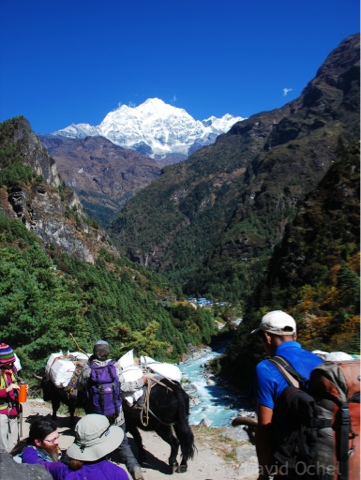 Trekkers trekking, horses porting, and cavers resting on the way up.
Apart from the elevation, traveling on the established tourist routes in the Khumbu is straightforward and convenient. Overnight, you stay in lodges that provide basic accommodation for a nominal fee and make their money by selling you (generally quite tasty) meals and tea, and often Internet access or the service of charging your batteries for many rupees. During the day, you hike along established trails that you share with tourists (a lot of them -- especially during our first weeks, beginning of November), horses, yaks (in the higher regions), and porters -- often chatting on their cell phone -- that either carry supplies to the towns at higher elevation, or tourists' luggage. Rare is the Nepali who isn't friendly, helpful, and hospitable.

We ourselves had pre-arranged to hire three porters on our way up to ease our own loads and drag our caving gear up the mountains. Unfortunately but not too surprising, they did not show up as agreed when our stuff needed to go back down two weeks later, and we had to improvise with lodge-arranged horses and porters that weren't quite as reliable as we had hoped. But it all worked out in the end.

One of the most valuable gadgets I dragged up into the Khumbu turned out to be my Kindle e-reader. I read about half a dozen books on rest days, in the evening, and whenever we weren't out and about. Probably more than I've read in the past year or so. Having to carry that much paper weight around would have been a burden. The solar panel worked out nicely, too, allowing us to re-charge batteries for our Sten lights, as well as Kindles, etc.

It remains a word to be said about the organized tour groups up in the Khumbu, based on many observations during the past weeks. "10-day trek to Everest Base Camp!", etc. -- I wouldn't do it. If you want to go "trekking" in the Everest region, either go by yourself (although I would always travel with at least two persons in case something happens), or get your own porters and/or guide. This gives you the flexibility to adjust your schedule and destinations on a daily basis, rather than being subjected to a pre-planned schedule without much respect to individuals feeling sick, tired, or needing an extra day to adjust to the altitude...