Bangkok and The Conclusion of Trip #1

On my way home, I stopped in Bangkok for a couple of days, since I had never been there before. What a fun place!

I spent a lot of time walking around, although the city is pretty accessible by metro, train, and cheap, reliable taxis. I felt pretty safe regardless of where I ended up, day and night - Bangkok's residents seem to usually return every smile and be pretty friendly folks. Obviously, there are enough tourists in the city that plenty vendors are in the business of marketing things and services (including "massages", of course) to the likes of us, but even those weren't very aggressive. (Or maybe I've just grown a thicker skin.)

I decided that the risk for montezuma's revenge was manageable, and ended up snacking constantly from food vendors on the streets and in little stalls, which was both quite affordable and super-tasty. I wonder whether it is even possible to exhaust one's appetite for Thai food in all its varieties? And my favorite thing about Bangkok's nightlife? Old Volkswagen Buses converted into mobile cocktail bars that set up in busy streets at night!

As the first trip of "David's Year Off" concludes, I am enjoying the luxury of getting home without having to go to work the next day. Although I am keeping myself busy with cave management reports that are due at the end of the year, and such things.

A few things that I have learned:

My Bangkok photos can be found on Smugmug. (The Nepal and Bhutan ones are still being edited.)

Posted by David Ochel at 7:56 PM No comments:

A Week in Bhutan

Since we were already in that part of Asia, Vickie and I had decided to use the opportunity and spend some days touristing in Bhutan before heading back home. A week was about the maximum that I wanted to afford on my year-off budget, as Bhutan is quite different from the style of traveling that I'm used to: regardless of itinerary and activities, you always pay the same government-mandated fixed daily rate and choose from a (fairly large) number of available tour operators that will provide a custom itinerary, driver, and guide. No taking the bus to places and choosing your own budget hotels. In return, you get to visit a country that successfully manages to preserve its culture and natural resources while not censoring its people or flat-out rejecting modern technology.

We got picked up by our driver and our guide at the airport, and got whisked to Punakha, where we visited the dzong (fortress) and the temple of the Divine Madman the next morning. From there, we moved on to Phobjikha, with the intent to see some black-necked cranes spending their winter in the Hidden Valley. The next morning saw us hiking the Shasila trail, a few hundred meters up and then about a kilometer down in elevation. It followed a day in Thimphu, and then two nights in Paro. (Including a visit of the Tiger's Nest, of course.) Beautiful places everywhere. We learned a lot about Buddhism from our guide, too. And, courtesy of the season, sun everyday, with a sweater (or more layers, at higher elevations) required at night. 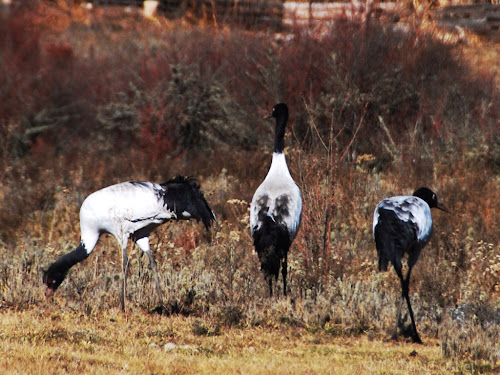 The hotels our travel agency booked us in were all beyond our expectations, to varying degrees. (Our expectations having been fueled by staying in mountain lodges in the Solukhumbu for the past month, but anyway. ;-)) Hot water anywhere anytime, comfortable beds, and decent food throughout, although most of the time buffet-style and, citing the Lonely Planet from memory, prepared "to not offend anyone". Talking about it...

Bhutanese food is quite interesting. Chilies are the main ingredient for some of the dishes, not just an addition to spice things up. The hottest ema datshi that we had was in Thimphu and drove pleasant sweat onto my forehead; others weren't quite as bad and had probably been watered down for us tourists. Meat is mainly brought in from India, since Buddhists have a hard time killing animals. Decent beer is to be had (Red Panda Weiss Beer, and Druk 11000 "Super Strong Beer"), although my IPA-loving friends might not get too happy here. 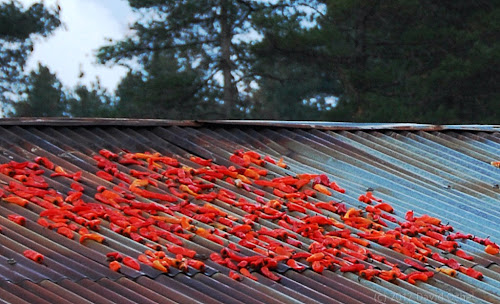 Chilies drying on a roof.

Thinking about going yourself? Make sure you tell your guide company your preferences, so that they can tailor your itinerary accordingly. In our case, deviations from a canned seven-day itinerary included making it to Phobjikha, and spending a day on a hike. If we had known/thought about it before, it might have also included staying in a hotel in town in Paro, allowing us to roam around in the evening, instead of at the really nice but remote resort we ended up at. Any spontaneous requests that don't involve changing hotel reservations can easily be handled by your guide, as well.

All in all, I think it was a worthwhile investment. Although a week of being driven around and guided to (admittedly beautiful) touristy sights is about what I can handle, I think. (We were limited to the western part of Bhutan, anyway, since driving up and down winding mountain roads takes its time and you can't just zip around 100s of kilometers in a day.) I'm glad we had some hiking built in. If I was to go again and/or for a longer time frame, paying the tourist rate, I'd probably want to build in some multi-day trekking. (Climbing mountains is off limits in Bhutan.) We also saw some Westerners riding around on mountain bikes, which could be fun. 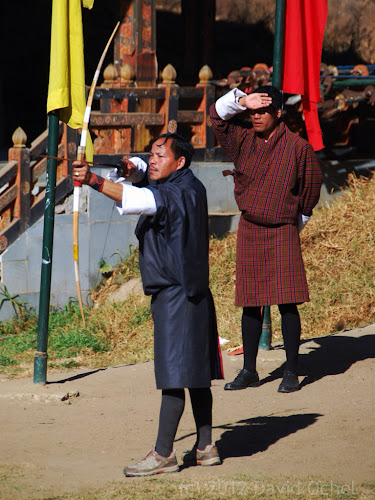